The split between art, an activity supposedly elevating the human faculties to a more refined status, and popular or mass culture, which is its negative, a culture of the masses and everyday toil, is constitutive of the field of aesthetics. Whetherobvious or latent, this opposition provides the backdrop that grounds Western conceptions of art as a distinct field of social practice. This talkexplores the tenuous relation between art and populism, a “hideous” aspect of popular culture, through the work of the British artist and taxi driver Mark McGowan and his project ArtistTaxi Driver. Ιn his daily YouTube video production, the Artist Taxi Driver employsan aggressive anti-neoliberal rhetoric, grounded on widespread populist binaries, such as the ‘elites’ and the ‘people’, nullifying the qualities of what is considered to be special about art in Western tradition, namely reflection, self-critique and non-didactic educational formats. His commentary on subjects such as the Greek crisis, the Scottish referendum and the Jeremy Corbyn election mobilizes the split between art and popular culture as populist negation of existent forms of governance and as an effort to construct a working class identity.. 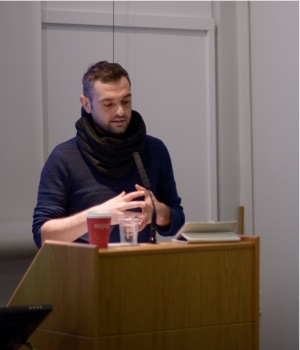 Panos Kompatsiaris is assistant professor of art and media at the Higher School of Economics in Moscow. He holds a PhD in art theory from the University of Edinburgh (2015) and his first monograph,The Politics of Contemporary Art Biennials Spectacles of Critique, Theory and Art, will be published by Routledge in early 2017.