Populism, the ‘people’ and the illusion of democracy – The Front National and UKIP in a comparative context, Aurelien Mondon

The 2014 European elections confirmed the prominence in the media of what is commonly called the far right. While parties such as the Front National and UKIP were successful in the elections, their performance has since been exaggerated and they have benefited from a disproportionate coverage. Aiding their apparently ‘irresistible rise’, their normalisation was greatly facilitated by their description as ‘populist’ parties. However, while this term ‘populism’ has been almost universally accepted in the media, it remains a hotly debated concept on the academic circuit, and its careless use could in fact prove counterproductive in the assessment of the current state of democracy in Europe. Instead of focusing on the reasons behind the rise of these parties, similarities and differences already widely covered in the literature, this article hypothesises that a skewed and disproportionate coverage of the European elections in particular, and the ‘rise’ of ‘right-wing populism’ in general, have prevented a thorough democratic discussion from taking place and impeded the possibility of other political alternatives. 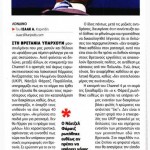 And it’s good night Vienna. How (not) to deal with the populist radical right: The Conservatives, UKIP and some lessons from the heartland, Oliver Grubera & Tim Baleb

Mainstream parties across Europe have been struggling for some time to counter the appeal of the populist radical right. With the rise of the United Kingdom Independence Party (UKIP), the British Conservative Party is now facing a similar challenge. We argue that, since this is the case, it makes sense to ask whether there are lessons it can learn from other countries – in particular Austria, where the centre-right People’s Party (ÖVP) has been competing against the populist radical right (most obviously, the Freedom Party) for almost three decades. In the course of so doing, the ÖVP has tried many ways to deal with the threat posed: treating the populist radical right as a pariah; adopting some of its policies and rhetoric; inviting it into coalition government; and finally pursuing a ‘dual-track’ approach. We evaluate each strategy in turn and find that none of them has enjoyed huge or lasting success. We conclude that the Conservatives need to realise that UKIP is not so much a problem to be solved as a situation to be managed. Seeking to toughen the Tory stance on immigration and asylum is unlikely to pay electoral dividends and carries with it considerable downsides in terms of the party’s credibility and reputation, as well as in terms of public policy. Moreover, even if a more restrictive stance does not prove entirely pointless or (worse) positively counterproductive, it imposes opportunity costs the Conservative Party should think twice before paying. All this suggests the value of a comparative approach to those wanting to understand the new dynamics in British politics.